Due to inaccurate news reports, things falsely implied in court, and rumors, many people inaccurately believe that Scott had intent to flee to Mexico, or that he actually fled to Mexico. We can address the later by simply stating that Scott did not flee to Mexico. He was arrested in San Diego as will be outlined below.

On January 15th, the Rocha family was informed about Scott's affair with Amber Frey. On January 16th, the Modesto volunteer center for Laci was closed down against Scott's wishes. Beginning in late January until his arrest on April 18th, Scott made multiple trips to San Diego to be with family. Scott had been literally forced out of his home. His wife and unborn child had been taken from him, there was constant traffic driving by their home, media was camped out there, their home had been stripped of many items during the search warrants (none of which had any evidentiary value), radio DJs called out to him with bullhorns while airing their show live from in front of his house, his house had been broken into, and the volunteer center and any effort to find Laci alive had ended in Modesto. 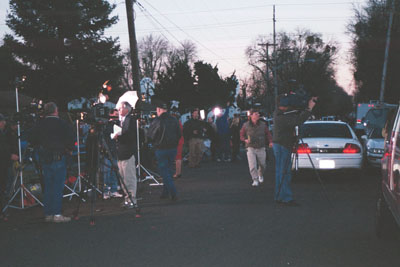 On January 19th, our family held a one-day volunteer center at a hotel in Los Angeles. The hotel was owned by the same group that owned the Red Lion where the volunteer center for Laci was in Modesto. When the idea was suggested to us by hotel management, we accepted. Why not Los Angeles? Laci had been gone for about a month and at that point and could have been anywhere. It was an opportunity for us to keep Laci's picture in the national media.

On the January 20, 2003 show of Larry King Live, one of the guests, a former FBI profiler named DeLong, expressed her concern at Scott's traveling to Los Angeles and San Diego, stating that he may be "making a run for the border". This was the beginning of public speculation that Scott was going to flee, and yet three months later Scott still had not fled.

Scott continues the search for Laci...

Once Scott's affair was made public and the Modesto volunteer center had been closed down, Scott could have just given up and let everything die down. He didn't have to do any interviews. He could have said nothing as his attorney, Kirk McAllister had advised. In an interview with Maria Shriver in mid 2003, Kirk McAllister said that he had told Scott to, "Keep his mouth closed tighter than a cow's ass in fly season." But Scott chose to ignore the advice of his attorney because he wanted to find his wife. Scott conducted media interviews without an attorney present and stated for people to think of him what they wanted but to not give up on looking for Laci. Is this something a guilty person would do or did Scott have what is known as the "arrogance of innocence"?

Scott goes to Mexico for work and comes back...

Scott's trips to southern California are confirmed by police surveillance and the testimony of Officer Skultety. Not only were the police aware that Scott was in southern California, but there is no testimony that Scott ever attempted to flee. Scott not only made multiple trips to San Diego, he also went to Guadalajara, Mexico and came back on a business trip in early February. He left Los Angeles for Guadalajara on February 3rd and returned on February 7th. The police were aware that he was going there. See the testimony of Detective Grogan for confirmation.

Two bodies are found, and the media attention intensifies...

On April 13th, the body of a baby was found on the Richmond shoreline. On April 14th, the remains of a woman were found on the shore at East Bay Regional Park. There was widespread speculation that these were the bodies of Laci and Conner. The media presence at our homes in San Diego returned. At any given time, at least six media vans and satellite trucks were camped out at Scott's parent's house and at least three vans were at his brother Joe's house. Each arrival and departure was met with constant questions regarding Scott's whereabouts and the identity of the bodies.
During that week, Scott had stayed with friends in San Diego, and with his sister, Susan, and her family in the Escondido area (also in San Diego County). On Wednesday, April 16th, Scott wrote down one partial and three complete license numbers of vehicles that were following him. Based on the media presence at our homes, Scott believed them to be private investigators hired by the media and indicated so in a fax to his attorney, Kirk McAllister. This fax was entered as exhibit D6W-5.

The day of Scott's arrest...

Friday, April 18th was Good Friday and Scott had plans to go golfing at Torrey Pines Golf Course with his dad, Lee, and his brothers, Mark and Joe. As Lee testified, "I was going to get three of my boys together and play golf, and just look for some, for normalcy in our lives. Get together, and be together, and enjoy our company."

Scott left Susan's house in Escondido at around 7am. He headed south to Ocean Beach during which time he noticed he was being followed. He went to his brother John's house in Ocean Beach where he picked up John's driver's license to use at the Torrey Pines Municipal Course. San Diego City residents get a discounted green fee. Lee wanted to save money and suggested to Scott that he pick up John's license so they could get the discount. (See Lee Peterson's testimony)

Without revealing they were police, nine to ten different unmarked cars followed Scott for over one hundred sixty miles in a four hour circle - north into Orange County, east to Riverside and south back to San Diego. Scott was once again making note of the cars that were following him. _ 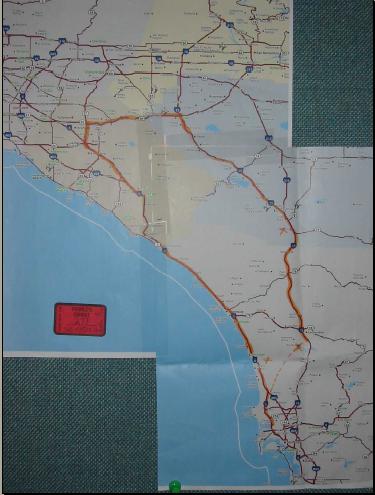 route map - exhibit 277
Scott did not evade the police...

As Scott was approaching the golf course where his dad and brothers would soon be finishing, the police made their first and only attempt to pull Scott over. Officers Quick and Limon testified that as soon as they put up their sirens, Scott immediately pulled over. Scott was not arrested in Mexico, or while attempting to flee to Mexico. He was arrested while trying to meet up with his father and brothers.

On the day of Scott's arrest, what was formerly referred to as, "San Diego" on the news became "30 miles from the Mexican border". For those of you not familiar with southern California, San Diego County borders Mexico - downtown San Diego is roughly 20 miles from Mexico. This created a widespread belief that Scott had fled.

We also want you to consider what Mark Geragos asked while questioning Officer Shear: "Do you know a lot of guys who trade in their trucks to buy bright red Mercedes so that they can go camp in Mexico?" (See testimony of Officer Shear)

Scott's appearance changed between December 24, 2002 and April 18, 2003. He'd lost over 20 pounds, grown a goatee and his hair was lighter. None of these changes took place overnight, or made him unrecognizable. Scott's picture had been plastered all over the media, and slow motion video of him was being shown on TV with creepy music in the back ground. Scott had become a recognizable figure. The goatee and hair color may have helped Scott avoid being recognized by media or someone on the street, but he was not trying to use these changes to hide from the police. You can see by the photos below that Detective Grogan had seen Scott outside his home on February 18th looking almost exactly how he did on the day of his arrest.
Scott never tried to hide from or evade the police. Once arrested, Scott was taken to the Department of Justice offices in San Diego. While there, he recognized Agent Sonia Ramos as one of the people who had been following him that morning. She had fishtailed and had almost gotten into an accident. Scott apologized to her and said he didn't mean to cause any harm, he thought she was media. (see Sonia Ramos testimony)

The camping gear and knife in the driver's door...

The camping gear in Scott's car was purchased March 16th at REI, one month and two days before his arrest. The store was adjacent to the soccer field where he had attended his nephew's soccer game. Scott's friend, Mike Richardson, testified that he knew Scott enjoyed camping. Video was shown in court from a trip where Scott had gone hiking and fishing with his dad, brother and nephews in the fall of 2002. Modesto Police Officers Hendee, Eichbaum, and Grogan all testified to finding camping gear or rugged camping gear when they had executed search warrants in December and February. Scott was an outdoorsman and he had bought some new gear. He just didn't have a place to take it home to. 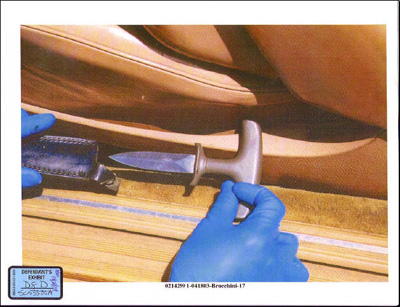 When Scott was arrested, he had over $14,000 cash with him. Following is the series of events that lead to Scott having so much cash with him. This was testified to in court and bank records confirm it to be true. Most of these exhibits were not made public because they contain personal banking information. ​
Scott did not flee...

Scott knew very early on that the police were suspicious of him. His good friend, Greg Reed, heard a comment from an officer the night Laci went missing that they (the police) felt they already knew what had happened. The police had searched his house three times, his warehouse, and his vehicles. They also held a press conference asking the public to help confirm whether or not Scott went to the Berkeley Marina on Christmas Eve (they didn't believe him). (see Greg Reed testimony)

If Scott had any intent to flee, why hadn't he done it yet? If Scott were guilty, wouldn't he have fled when two bodies were found? He wouldn't need to wait until they were identified, he would have known who they were.
In early January, the police announced they had found an object in the bay that appeared to be a body. They announced it would be three more days until they could go back and retrieve it. If Scott was guilty and had intentions of fleeing, wouldn't that have been a good time as well? (The item ended up being an anchor)

Additionally, from Mark Geragos' opening arguments, "He had also just paid his car insurance, paid his income taxes, filed his 1040s, his income tax returns, and had not cashed his paycheck. And as you saw yesterday, he had some children's books in his car when he was arrested. These were children's books for his nieces and nephews to give to them on the following Sunday, which was Easter. And this is hardly the idea of a man who is preparing to flee."