Through our "Featured Fact" articles we have been correcting misinformation that has been disseminated for over three years - one issue at a time. We realize that we are literally trying to prove Scott is innocent. The legal standard in our country is that the prosecution should have to prove that Scott is guilty beyond a reasonable doubt. According to the prosecution, Laci was murdered by Scott sometime after 8:30 on the 23rd. You can see by the following statement from Prosecutor Rick Distaso's closing argument, they're not quite sure when:

The prosecution never explained when Scott killed Laci and no one, including the prosecution, has ever given a series of events that fits the circumstances and explains how Scott could have killed Laci. We have stood by Scott and maintained his innocence. Not because he is family, not because we "hope" he is innocent, not because we "believe" he is innocent, but because we know he is innocent. There has been plenty of talk about Scott's "behavior" but not any talk about how exactly Scott could have carried out this crime. If it doesn't fit the circumstances, it is not true.

Our challenge is for those of you who believe Scott is guilty to put together a timeline of how this crime was carried out. Tell us how Scott could have committed this crime with a series of events that fits the circumstances. Based on our "Featured Fact: Scott's Timeline" (if you have not read this article, we strongly suggest you do so before accepting the challenge), we have constructed an outline of factual events that took place in the 24 hours before Laci was reported missing. If you think Scott is guilty, or if you're just up for the challenge, please construct a timeline with a series of events that proves he was able to perform all that would be entailed in committing the crime. Below the outline, we have listed a number of topics that must be addressed.

The topics listed contain frank, blunt questions and comments challenging the assertion that Scott killed Laci. We do not do this lightly. It is painful for us to speculate in what manner Laci's life was taken. Laci was a member of our family. She was not only a wife to Scott; she was a daughter-in-law, sister-in-law and aunt to us. We knew her and we loved her. Conner was a son, grandson, nephew and cousin that we did not get to meet.

8:30pm - Laci is on the phone with her mother (last known person to speak with Laci other than Scott)

5:00am - Both Scott and Laci's cars are in the driveway per neighbor, Susan Medina

9:39am - Friend, Kristen Reed sees Scott's truck in the driveway

9:48am - Scott is watching Martha Stewart

10:08am - Scott is on his cell phone somewhere between his home and his warehouse (travel time from home to warehouse is approximately 9 minutes)

5:17pm - Scott calls Laci's mom to see if she is at their house helping prepare dinner (per Sharon Rocha's testimony)
Topics to Address
Below is a list of twenty topics that need to be addresses in your timeline. If you read through the topics and cannot give an explanation or do not understand what is being asked, we assert you do not have enough information to say Scott is guilty.

1.  Explain why Scott is spontaneously committing to things at the salon on the evening of December 23rd . If he had plans to murder his wife that evening, one would think he would be too preoccupied with his plans to make the offers.

2.  Explain when and how Scott killed Laci.

3.  When Laci's body was recovered, there was a piece of duct tape stuck to her pants. Explain why and how duct tape got on Laci's pants.

4.  Explain how and when Scott cleaned up all the “crime scenes” without leaving any evidence of a murder or cleaning up.

6.  Explain why the curling iron is on the bathroom counter with the cord stretched toward the outlet , and explain why the bench is in front of the mirror.  (see pic below) 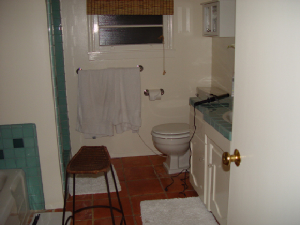 7.  Explain why Scott is watching “Martha Stewart” on television.

8.  Explain why Laci was found in clothing, as though she got up and got dressed the morning of December 24th. 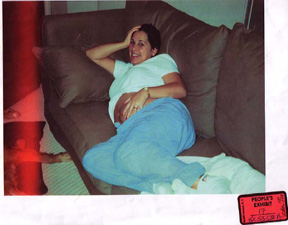 9.  Explain why McKenzie (the dog) was found outside of the backyard with his leash on.

10.  Explain how and when Scott loaded her body into his truck.

11.  Explain why Scott is checking his voice mail while he drives to the warehouse.

12.  Explain how long it would take to transfer her body from the truck to the boat. 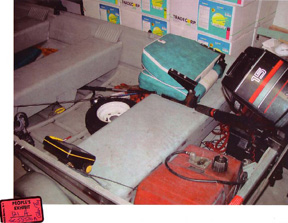 The inside of Scott's boat
13.  Explain why Scott is on his computer looking up how to assemble a mortiser and checking e-mails if he has multiple crime scenes to clean up and a body to dump.

14.  Explain when Scott assembled the mortiser.

15.  Explain whether or not Scott weighed down Laci's body.
16.  Explain how long it took Scott to drive to the Berkeley Marina. The speed limit while pulling a trailer is 55mph. 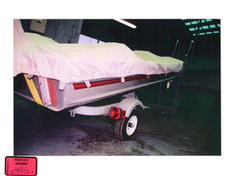 18.  Explain how Scott dumped her body (weighed down?) out of the boat with out the boat capsizing.

19.  Explain why the police, FBI, Navy, Coast Guard, Department of Justice, and Sheriff's Departments, etc. never found her body even though they started searching on December 27th .

20.  Nancy Grace speculates that Scott must have made two trips to the marina. The quote below was taken from the Larry King Live show that aired June 15, 2004.

GRACE: I think, given what we know right now, they'll have to present a two-trip-to-the-bay because, when he went to go fishing in the afternoon, believe you me, if he is, in fact, guilty, he did not dispose of Laci's body at that time in plain view in the middle of the day. Now, another thing we were talking about earlier about what's the strongest evidence -- I say it's the timeline. We have Scott Peterson, based on triangulation of cell phone records and cell phone towers, in his own neighborhood at 10:08. At 10:18, the neighbor finds the dog running free with a muddy leash. He's narrowed it down to 10 minutes for an unknown assailant to grab his wife. And he happens to be in the neighborhood at the same time. I think they've got to go with a two-trip-to-the-bay.

There are many additional topics that point to Scott's innocence that need explanation including the condition and circumstances of Laci and Conner's bodies when they were found. We have not included these issues but we will address them at a later time.

Info can be emailed to scottpetersonappeal@gmail.com